How to draw spy woman character design step by step

August 20, 2007
How to draw spy woman character design step by step.  This tutorial is a simple drawing of a cartoon or comics book character design.  Look below you will see the image of step by step drawing the head, body and her pose.
First step, I start off with a circle shape and two lines from circle to meet up to create a chin for her face and head.  Then a short line to indicate the back of her neck.
Step two, I sketch out an oval shape for her upper body or torso, two lines for her arm, and a long curve line below for her thigh or leg.  Oh and two more lines to connect her head with the body.
Step three, I draw a round shape next to her leg and below her upper body.  Then I draw forearm to connect with the previous drawn lines for her arm.  Also hand, then I finish this part with her other arm holding pistol.
Step four, I draw in her face, hair and her bang.  I also have more tutorial in detail about drawing face.  I recommended how to draw female face and a more simpler cartoon drawing Anime girl face step by step.  Or you can look at the idrawgirls directory draw face and draw Anime Manga It is also useful to add some simple shading on to the character sketch to give it more present.

How to draw female spy character design step by step.

A quick spy woman character design.  I also have a final version that I work on further in Oct 2011 here.  Painting spy woman step by step. 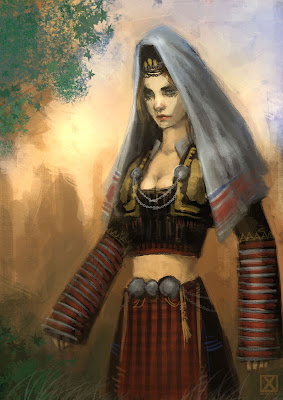 The first one came out alright. The second is still "Work in Progress" (WIP)
More to come, tomorrow!

Anonymous said…
thats a variant of the Bulgarian costume.There are all kinds of those in Bulgaria.And i should know ,Im from Bulgaria. http://feedjit.com/stats/idrawgirls.blogspot.com/map/?x=56&y=22&w=160&h=94 see ,Im from Sliven
September 21, 2008 at 11:41 PM