RoboTech aka Macross, How to draw Mecha, manga & anime step by step video for Anime, Manga and comics

February 25, 2008
How to draw Robotech Anime or Macross step by step video for Anime, Manga and comics : video tutorial with instruction online.
From the initial thumbs stage, start sketch the initial idea mainly using value and lighting, drawing, block in shape, and render. The video demonstrates how to quickly create an efficient concept design from concept idea into visual. How to put rough idea onto the paper sketch and create sci-fi character concept art online lesson for comics cartoon illustration, manga, and anime.

Good news, you will get to see the Robotech (Macross) comes to life.
The actor Tobey Maguire (Spiderman) will head the "Robotech" live action movie.

Maguire not only would occupy producer's cargo in the movie. since also his idea would be to be the protagonist of the movie version of this classic, The script for the big screen will be written by Craig Zahler.

One of my favorite series when I was a kid, Macross. This is actually the first time I ever attempt to draw it. :P
Here is a final color sketch of Robotech: 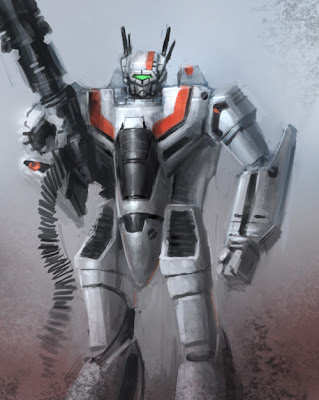 Here is a video tutorial: How to draw and paint Robotech:

** If you have any basic questions or specific and do not get my reply right away, please be patience. I usually answer them. In the mean time you can browse through all the Lables or Archives. Your questions may already be solves in one of these tutorials.

Thanks for all overwhelming e-mails guys!!! Due to the high volume of e-mails and questions, I apologized that I cannot usually reply to you within a day or two. I will try my best to answer them all personally and get all the questions answer either by Videos or Post.Have a great day & thanks for stopping by!
Tutorial: Robotech

Anonymous said…
Awesome, love the battloid, keep up the good work, but the ammunition looks unfinished...but still awesome anyway!
March 4, 2008 at 9:38 AM

idrawgirls said…
Godpir>> Thanks man! The unfinished is pretty much intentional...I spared my time off of daily work to do this blog and recording sketch about 20-30 minutes per day...so I can improve my art and also share the process with people. Cheers!!!

Volke>> Thanks man!!! I try. Hopefully more of Robotech will come!

Anonymous said…
I am really impressed! You are very talanted. I am learning alot from this page and I would just like to thank you for you hard work!
October 13, 2008 at 8:55 PM

idrawgirls said…
Anonymous> Thanks for your kind words. I am planning to do more of Macross, and other cool retro old robots...hopefully. Check out the new tutorial also, I try to update them daily. See you soon!
peace!
October 14, 2008 at 10:26 AM

Anonymous said…
Wow I remember Robotech from when I was a kid. Good job Xia. I feel like my art has gotten a lot better since I started studying lots of your tutorials.

Keep up the good work! I'm going to school for Game Art so this site is such a great place to see cool concept art.

idrawgirls said…
anonymous> Thanks brother! I hope you get better because that's why I did the blog and post all the vids.
Hopefully, everyone who came and visit gets something out of it.

idrawgirls said…
Anonymous> Thanks
Beginning: 30% to 50% finding your values.
Then final only use mostly 100%.

Soft and hard brushes, you will have to learn how to balance edges, as for Mech stuff mostly hard.

Watch more vids then you will understand.
Because if it is ROME you want, it will not be build from just watching 4-6 mins vid.