Learn how to Draw a Girl: Face, step by step Tutorial.

September 13, 2007
Learn How to draw face or feature for female, woman and girl. Online drawing and sketching lesson, step by step and video.
Hello, I am back with another tutorial. There are some request for step by step drawing face. So I am going to go very basic on this one from start to finish. This is just part one of this "How to draw a girl's face" tutorial. In part II, I will show you step by step painting this one from start to finish. Here it goes!

Below is How to draw FACE step by step Still Images

1) I start with an egg shape drawing, very old school and traditional and it quick for me. On this one I am going to angle it a bit so the face will be 3/4 instead of the frontal shot. Always attach the neck and a bit of shoulder with the head when doing face, it gives you more of an illusion of this is part of a person. When you see an illusion of this is a part of a person, you will do a better job filling the rest in, instead of just an outline of egg shape or oval.

2) Imagine a front surface of an egg, think in three dimension, then draw a vertical line to split it in half from top to bottom. Then draw a horizontal line to divide the top and bottom distance in half. This horizontal line would be where humans eyes should be, they are usually right in the middle of the face horizontally. But most of the time we don't really see that because our hair deceives us.

3) I add two more horizontal line on top and bottom of the existing one. These line will help me indicate how tall should the eyes be in comparison to the rest of the face. I also make the mark on the right side of the head where the top part of her ear should be.
Another mark for the bottom of her nose, it is half way in between the first horizontal line and the bottom of her chin. And again in between the nose mark and the bottom of the chin half way should be where her mouth is.
The last mark on this one is for ear lobe, it should be a bit above the nose mark.

4) Following the marks I made. I draw the eyes, it should no be taller than the distance of the top and bottom horizontal lines that I added on to the first horizontal (With exception of some style such as Disney and Manga which I might later on make a tutorial for it, but I will stick to the normal or close to normal proportion for now). Notice, I draw the corner of both eyes in relation to the first eye's indication line. Also the distance between the two eyes should equal one eye. So when you draw, imagine there is an invisible eye in between them. Then I begin to draw the nose, notice that I did not draw the whole nose. Why? Because in reality when you see the whole nose you tempt to draw the whole nose as you see. But if you paint a lot or draw a lot from life (especially in painting). You will notice, from squinting to find value in painting or rendering, that the value of the physical nose compare to the rest of the face is not at its darkest value to be able to put them in line drawing. If you were to draw a simple face which using black or darkest value to define the line drawing. The only part of the nose that should appear in line drawing should only be the bottom of the nose. Because that's where it casts the shadow as strong as a person eyes' line, eyelashes, and lips. (Make sense?) Then I finish this one off with the upper lips.

5) Now I add in eyebrows, the head of the eyebrow be about the same distance as the eye's corner horizontally (Unless you want to make your girl looks uni-brow), but the tail can be longer. Then I add a line to suggest her lower lip.

6) Now I draw her hair around the top of her skull. Some of it should cover top half of the skull or a bit less if she should pull her hair back. Then I put in an ear.

7) Clean up all the lines that should not be there. All those guild lines that we draw earlier. Now it is close to being done!

8) I am now trying to beautify her by tighten her eyes more, thicken her top eyelashes, darkening the area in between her eyebrows and her top eyelashes, and I thin out her bottom eyelashes. Also I create soft lines in between her eyes to suggest her nose bridge. Then I go down and add a bit of her nostrils within the value which you can barely see. At last, I darken the value of her upper lips and draw in a mouth line. Then we DONE for drawing face.
*At this stage, since you have the basic facial struggle layout, you could play around with it however you want. You can make different eyes' shape, thining or thickening the eyebrows, whatever you please or however you want your character to look. 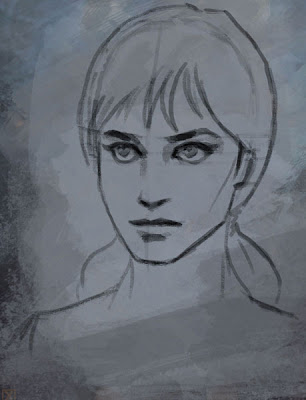 9) Final touch, I round up her shin and jaw line just a tad to reduce the angularity (angularity = masculine ). But you have to be careful because you don't want her face to look too round, it will loose sharpness or edgy beauty. And I add value to her hair so make it a bit more official or dynamic as value drawing. Drawing girl is an art in itself so keep practicing.

Here is a quick Video on How to sketch and draw woman face: 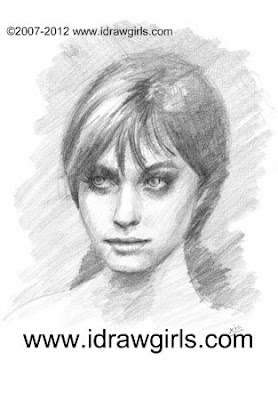 *It could also be done with Graphite or Pencil and Paper.

Hope the tutorial will do some goods! Good luck and have fun

idrawgirls said…
Anonymous> Thanks, glad they are helpful. Mission accomplished! One at the time.
November 11, 2009 at 10:10 AM