How to draw female face

February 05, 2010
How to draw female face.  How to draw woman head or female portrait, woman face instruction: Drawing Girl face: Learn step by step tutorial start from line draw to graphite (pencile) render. Here is another attempt to create a how to draw sexy girl feature or portrait tutorial instruction. 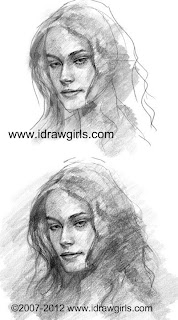 Another Step by step drawing tutorial

A head or face tutorial this time I use graphite or pencil (3b to 5b are the range of blackness I personally like) . I am going to go very basic on this one from start to finish including a bit of pencil rendering.
Below is a step by step how to:
On this one I shorten some basic beginning up a bit:
If you want more detail how to start face frame structure go to

1) I usually start with an egg shape drawing, very old school and traditional and it quick for me. On this one I am going to angle it a bit so the face will be 3/4 instead of the frontal shot. Always attach the neck and a bit of shoulder with the head when doing face, it gives you more of an illusion of this is part of a person. When you see an illusion of this is a part of a person, you will do a better job filling the rest in, instead of just an outline of egg shape or oval.
2) Imagine a flat plane on front surface of an egg, think in three dimension, then draw two vertical lines along the edge of your imaginary plane. After that, draw a vertical line to split the flat plane in half from top to bottom. Then draw a horizontal line to divide the top and bottom distance in half. This horizontal line would be where humans eyes should be, they are usually right in the middle of the face horizontally. But most of the time we don't really see that because our hair deceives us.

3) Now, I draw the eyes, it should no be taller than the distance of the top and bottom horizontal lines that I added on to the first horizontal. I draw the corner of both eyes in relation to the first eye's indication line. Also the distance between the two eyes should equal one eye. So when you draw, imagine there is an invisible eye in between them. Then I begin to draw the nose, notice that I did not draw the whole nose. Why? Because in reality when you see the whole nose you tempt to draw the whole nose as you see. But if you paint a lot or draw a lot from life (especially in painting). You will notice, from squinting to find value in painting or rendering, that the value of the physical nose compare to the rest of the face is not at its darkest value to be able to put them in line drawing. If you were to draw a simple face which using black or darkest value to define the line drawing. The only part of the nose that should appear in line drawing should only be the bottom of the nose. Because that's where it casts the shadow as strong as a person eyes' line, eyelashes, and lips. (Make sense?) Then I finish this one off with the upper lips.
I also make the mark on the right side of the head where the top part of her ear should be (same level as eyes). Then another for ear lobe, it should be a bit above the nose mark.
4) Now I add in eyebrows and hair indication, the head of the eyebrow be about the same distance as the eye's corner horizontally, but the tail can be longer. Then I add a line to suggest her lower lip.

5) After all the frame work is done, now I can start to go in and tighten up some of the facial feature, I usually like to begin with her eyes.
6) Then I work my way down to her nose, lip and such, but nothing too dark, just light rendering to get all the indication of feature detail down first.

7) Now, I am just indicating where would I place my shadow areas if the light coming from in front of the face. At this stage, I render very lightly just so that I know where to place darkest dark on the final rendering.
8) Since I think the overall face looks ok, now I am going to finalize the drawing. The usual areas where shadow hits the darkest dark are eye sockets (for more detail on drawing eye go to How to draw eyes video tutorial), under the nose, under the upper lip, and above the chin (underneath the lower lip).

9) Now I start to finalize the drawing from area to area, begin with her left eye. Then from here I use the existing value of this particular area to compare to the rest of the final rendering.
Then I go for the other eye, and compare value (always compare value for the rest of the drawing).
10) After I get both eyes, then I begin to work on the rest of the face start with the darkest value like around the nose (more detail on drawing nose go to How to draw nose video tutorial), lips (How to draw lips in detail), and chin.

11) Now I have the whole face render, and I have to do the same for hair. (Darker hair has stronger contrast and hight light, and lighter hair usually have less contrast.)
12) Now the whole face is done, all I have left to do is to finish up the background to make it a little more appealing. So I scribble in the background to make the white on her face pop out even more.  For hair video tutorial go to How to draw hair.

DONE!!!  You can also check out the Premium +2 hours video tutorial on How to draw female portrait.

Video tutorial demo, it is a different face. The one above I posted long time ago and didn't have any equipment to record a video drawing so. But basically, they start and end the say way.

Here is how to draw face basic


Then, how to shade and render face or portrait:

How to draw portraits.  Premium tutorial.


Review from our Customers


“You are not only a superb artist. You are an excellent teacher.”


“I have to say thanks to you and watching your videos over the years and homing my skills has helped me get into the industry too have been working with a game company for months now and its down to how your videos inspired and helped me. So thank you :D this stuff is also epic ! And Thanks i really appreciate all of this.”


“I love you're videos because you explain what you are doing ewally well and they are very informative Thank you...and keep up the good work.”


“For anyone who is afraid of spending a little money on buying any of the Premium tutorials on idrawgirls.com I gotta say I have tried the Dark Warrior male concept tutorial and it is worth the money. You guys will not be dissatisfied. He is extremely knowledgeable and explains things really well. I know I am happy with it.”

Peace! and have fun with the process: Go Draw!!!
Basic Tutorial: Face 3/4 view

P.s.
Auto-focus on video cameras works on contrast and when you start the video your hand has more contrast than the picture which is why it goes in and out of focus. The only way around it is to switch it to manual, but not all cameras have this setting.
August 3, 2010 at 4:25 PM

idrawgirls said…
Olf> thanks. Yes, about the autofocus, I realized. My camcorder kinda sucks, it cannot be turn off. Now I have to save more money and buy new ones. :)
August 18, 2010 at 9:07 AM

Legolos13 said…
hey, been watching your stuff for a long time, always amazing... was wondering, what type of pencil do you use?

i always start with a 4H, and work my way to a darker pencil, but then 4H is also very hard to erase, and it looks like your pencil is good for getting both light, and dark, and it looks easy to erase.

so what type do you use/reccomend?

idrawgirls said…
Legolos13: Hi, thanks. On the right column of the blog there is this topic called "-How to pick pencils for drawing" Your tools are to your liking. I use pretty much everything depending on what I feel like and what result I want to get, Dark or light.
go here: http://idrawgirls.blogspot.com/2008/08/what-kind-of-pencil-is-best-for-drawing.html