I know that James Cameron has plan to make "Battle Angel" for years, but it seems that it will not be on his priority list any time soon. Now he's working on Avatar, then Weta is now, hopefully, still working Evangelion (Neo Genesis) pre-production. But not any news for Alita (Gunnm). Way back when, they were going to pick Jessica Alba, but as of now...I think she is a bit too old for the role.

So I thought, who would be good at the moment, and out of the blue...I am looking for any young actress,...first...the one from Juno (Ellen Page) she's a great actress!!! but then she doesn't look like an Angel. And somehow I stumble upon Emma Watson! So I just try to paint and fit her into the Gunnm character design. I make her look a bit more deadly and evil on this one.

FYI: I will make an extended version (3 parts tutorial with narration for this one sometime soon.) 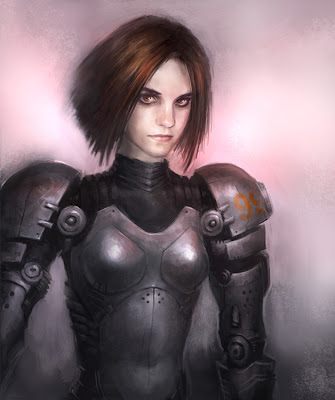 Below are four part instruction of how to illustrated Battle Angel Alita Concept:

I)
Rough idea and sketching:


II) Focus on this part will be on establishing facial structure using value.

ALSO if you want to see the BLOG update more often and not DISAPPEAR from the INTERNET, PLEASE help US DIGG, STUMBLE, TECHNORATI, send them to friend!!!!!

your drawings are cool, congrats
but Emma Watson--- is not

we would need someone as beautiful as Winona Ryder , but younger of course

the actriss doesnt have to translate directly to the manga
well , that's my opinion
August 20, 2008 at 3:00 PM

is there a way, to have from you, these videos about Hermione as Battle Angel but in big high quality size, and downloadable version please ?

That would be very nice ;)

One quick question - what is the song that is playing in the background on part II of the Emma Watson painting detail? It is very catchy and I would love to paint to that! Please let me know, thanks!

V said…
Made a Jessica Alba search and nothing but that mention? C'mon man!
=P
Do a how to draw Jessica Alba's lips please, you know they're something else :D
April 24, 2010 at 6:32 AM

idrawgirls said…
V> Jessica Alba used to be my fav a few years back...maybe but not promise, I am always on the go for looking for new inspiration and faces. BTW this post is already over two years old. :)
April 27, 2010 at 12:01 PM

V said…
I know but as I said, I did a "Jessica Alba" search and there's nothing but that mention. And I read the previous comment "it's been almost two years since I made the video" so is clear you get email notifications for new comments :D
April 30, 2010 at 11:00 PM

idrawgirls said…
V> Yep, I get the notification...and I obligate to answer all if I can because you are all welcome guest on the blog. And no I have never draw jessica alba and probably not any time soon :)
May 3, 2010 at 10:09 AM