January 24, 2008
Anime tutorial draw and color mecha robot.  Learn how to draw design, and paint mech robot sci-fi: video step-by-step tutorial with instruction online. A step by step how to sketch and paint to create Mecha concept. Whenever I want to start to come up with concept idea, I usually do this speedpainting concept spend about twenty minutes to an hour to get the idea down. You can watch and learn my process of how to put rough idea onto the paper sketching and create sci-fi character concept art online lesson for comics cartoon illustration, manga, and anime.

This one is Eva inspired, I grow up with it during my late teen years. Didn't get to watch much then, but I got the whole series a few years back.

Here is a quick speedpainting concept: 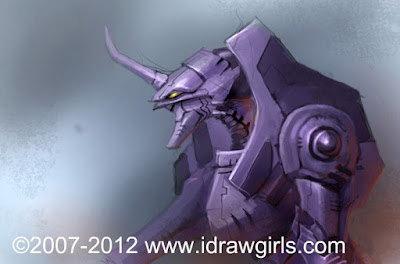 Here is a video Tutorial of How to draw and paint Mecha Robot:

ALSO if you want to see the BLOG update more often and not DISAPPEAR from the INTERNET, PLEASE help US DIGG, STUMBLE, TECHNORATI, send them to friend!!!!!

Anonymous said…
I just watched this video and I love the way that this turned out, keep up the good work, and I'd like to see more mecha drawings...
January 25, 2008 at 2:35 PM

Anonymous said…
I really love how you do those artworks. But i dont get how u color all the stuff and how u use the smudge tool to keep it realistic..

Maybe you could do a tutorial just for the way u color it or how to use the brushsettings (opacity/flow).
Or i dont know. It would be a big help for me because i want to become better and i really need some help :(

Anonymous said…
hi,
this is exellent and has really helped me with my rendering.
I have one question though- what is the tool you use after the first shade you apply on the right side of the mecha? to blend out the shadow?
thanks
August 7, 2008 at 4:36 PM

idrawgirls said…
Sam> I paint first stage of value (shadow) on separate layer, then I use softround brush to erase it around the edge. I hardly never use blending tool, some people do. There are many ways to skin the cat, only the end result matters.
August 10, 2008 at 9:12 PM

Anonymous said…
Do I really need to get one of those Wacoms? Because I'm a bit concered if I should get one or not. And where can I find the Flat brush thing that you use in the start? :)
January 20, 2009 at 4:35 AM

idrawgirls said…
Ano> Well, if you serious about doing art then you should. If it's just a hobby to you, then you don't need it unless you are rich and have lots of money laying around. Well, I would recommend it because it's easier than real paint, and you can save lots of TREEs that way.
The flat brush, just go to default round PS brush-- Open Brushes window the squeeze the circle together, now you got a FLAT circle brush or just plain flat brush.
Peace!!!
January 28, 2009 at 4:09 PM

Anonymous said…
Love it, but i just get really confused with the brushes that u us at the very first stage.
when you are defining the shadows what kind of opacity and flow do you use.
and at the end for the final touches i also have the same question

idrawgirls said…
Anonymous> Thanks
Beginning: 30% to 50% finding your values.
Then final only use mostly 100%. Watch more vids then you will understand.

Anonymous said…
I really appreciate your art and this website...i just recently found out about you...3 days ago lol and your work is amazing.....truly an inspiration to me...i been drawing(sketching) for 10 years now .....trying to use APS cs2...i dont understand the brush your using...the one that doesn't go over the lines you drew for the outline of your drawing...please get back to me on this...thank you..
March 28, 2009 at 7:14 PM

idrawgirls said…
Anonymous> Thank you for the kind words. I use a bunch of different programs.. but mainly PS cs2, cs3, and cs4. Paint underneath the layer then it won't go over the lines or use overlay. :)
March 31, 2009 at 3:11 PM

Anonymous said…
Can you tell me what is best
1.-Wacom Bamboo
or
2.-Wacom Bamboo Fun
?
pls reply in less than a week :)

idrawgirls said…
I would rather get WACOM intuo2-3 or Genius MousePen 6x8. Bamboo is probably way too small to be able to draw anything like that. Peace!
July 22, 2009 at 1:57 PM

idrawgirls said…
Anonymous> Don't sell yourself short. :) If you use it everyday then you will be good. Practice practice practice and come visit idrawgirls to learn more tips and watch tutorials. Cheers!
July 24, 2009 at 6:16 PM


There is a request so here is goes. I don't usually study individual part of the body, but it's good to observe and really observe how lips place, form and behave. I usually place them into the context. Remember, when you put the individual piece in the context, things change and when lighting comes in to play, you will have to paint or draw according to the light source and what you really see (shape and form), not what you know. *Mouth and lips may no longer look like what it is in some context, you will just have to illustrate what you really see and try to capture the shape and value, instead of trying to draw a mouth or lips.


This tutorial on lips demonstrates as if the light comes directly above and in front of her face or lips. If the light changes direction, it will be drawn and render differently. After all this is just a basic study tutorial. Have fun!


Below is a How to draw mouth a…

I have a few people request doing a basic female body form so here it is. It's just a basic model proportion sheet to practice basic female form for beginners. My advice is that it is not flattering drawing female figure as it is shown, it is a model sheets. And very BASIC.
When drawing female or woman, you have to keep in mind their body language, gesture, and movement. You have to find what make them femenine, how sexy female stand or sit or lay. How do they move what kind of poses. How would a tough, but sexy or cute woman would poses...it's all depend on the personality of the character you want to portray. Though you have to study from real people, from good reference, from movie or any kind of media around you.
One of the best way to practic… Now back to the basic a little bit. I have so many emails, youtube comment, facebook, etc. asking me if I could do a drawing hand tutorial. Well, it's been a long and lots of requests. So here we go, this video is for you guys.

Other than faces (facial expression), hands are probably the second most expressive and intricate part of the human form. So hands in general should receive careful attention.
Aside from the head, they are usually the only other exposed part of the body and can be useful in communicating without verbal. Hands are equally as expressive in gesture, emotion and action. Because of the complexity of joints, masses and planes, along with their expressive nature, the hands can, and usually are, the hardest thing to learn on the entire human form.

But in this tutorial, in my opinion, you don't have to draw every single detail of the hand because as a concept artist or illustrator, you will hard…