On this one we’ll use gray scale value to quickly present our idea. Step by step how to start sketching the initial idea, drawing, blocking in shape, background and rendering. The video demonstrates how to quickly create an efficient concept design from concept idea into visual. How to put rough idea onto the paper sketch and create sci-fi character concept art online lesson for comics cartoon illustration, manga, and anime.

Here is the final sketch: (BASIC) 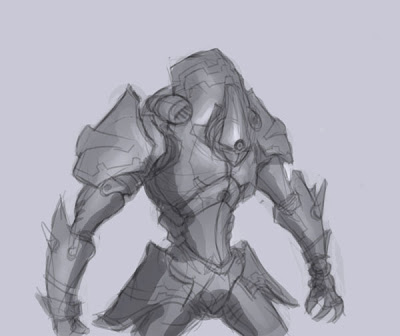 Here is a Video Tutorial: How to design Mecha BASIC

new from Wacom!) Economy for everyone.
*You can also use pen and markers*

Anonymous said…
Quality stuff bud. Love the life-esque art stuff. Great Mecha tutorials. Trying to get my buddy in to doing that type of art but he's not too keen on engineering ideas for robots.
June 24, 2008 at 2:09 PM

Anonymous said…
Great robot. What kind of brush do you use most of the time when creating the basic outline of the character? every brush I try and outline with comes out kind of too thick and smudgy but yours are thin and finer.
October 23, 2009 at 5:53 AM

idrawgirls said…
CK> Thanks buddy. Your buddy should draw what he likes and passionate about.

Anonymous> This one use mostly default brushes. Maybe you should paint using bigger resolution canvas then you will get finer brush res.
October 23, 2009 at 8:16 AM

Anonymous said…
I really appreciate what you do. Your blog is far the best in the internet as to "how-to-draw" tutorials.