Voltron is getting Green light from 20th Century Fox.

The 20th Century Fox-based production entity is close to a deal with the Mark Gordon Co. to adapt "Voltron: Defender of the Universe" into a live-action film.
Gordon has been developing the pic, based on the popular 1980s Japanese animated TV series, comicbooks and toy line, with Justin Marks penning the script. 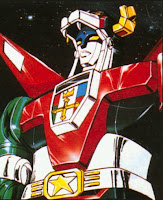 Should the deal close, project would be one of the company's more high-profile efforts since Robert Harper took over as chairman-CEO of Regency Filmed Entertainment earlier this year.
Interest in the property hit a high after "Transformers" turned into a box office juggernaut, raking in nearly $300 million to date.

New Regency, which hasn't had a major hit since "Mr. & Mrs. Smith" in 2005, sparked to the idea of a potential franchise.
I heard somewhere that the script for the movie is GREAT! that’s the word from Latino Review, who as usual has gotten their hands on an advance script of the upcoming “Voltron” live-action movie. Yes, a movie based on that show about giant lion robots that can combine to form a big f’in robot, kinda like Transformers, but with swords and, um, giant lion MECH for limbs. The script in question was written by Justin Marks, who has basically usurped the position once held by David Goyer as the go-to guy for comic book movies.

How to draw Mecha Voltron step by step video for Anime, Manga and comics.

How to draw mech or mecha: Voltron, macros, step by step video for Anime, Manga and comics : video tutorial with instruction online. How to start sketch the initial idea mainly using value and lighting, drawing, block in shape, and render. The video demonstrates how to quickly create an efficient concept design from concept idea into visual. How to put rough idea onto the paper sketch and create sci-fi character concept art online lesson for comics cartoon illustration, manga, and anime.
Music by Stereo gimmick: kelticcharmanoid (Free Promo)

Here is a final color sketch: 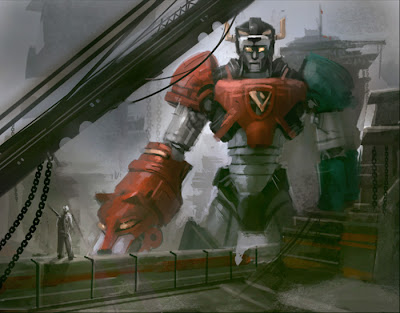 Here is a video process: Drawing and painting VOLTRON.

new from Wacom!) Economy for everyone.
*You can just use pencil, paper, ink, screentone, pen, and gauche on this one. It's not that complex.
FEATURE TUTORIAL:

Have a great day!

Em-J said…
I've been looking at youre tutorials alot and i wonder if you culd make a tutorial where you eksplain how to make armor look hard if you havent done it already. i'm trying to draw armor, but it looks sooo soft.. and i'm abit confused about the brushes you use. culd you eksplain abit about brushes too. i see you use alot of diffret ones and have manny costomised brushes i dont have on my verson of photoshotCS. it wuld realy help.