How to draw woman in trench coat

December 07, 2008
How to draw Naomi Hunter in lab coat. Naomi Hunter is a character from Metal Gear Solid.  Step by step and drawing video tutorial lesson tutorial online. You can either follow me using pencil and paper or digital medium like Photoshop or Gimp digital painting program tool. Comics and Manga tutorial e-learning video and step by step. Learn how to draw woman and costume hybrid comics style online lesson video sketching process tutorial and step by step still images.
Drawing and shading quick female with costume character concept design, learn how to create quick visual concept for comics, manga, anime and video games. The video progression and visual aids step by step show you how to create a concept drawing from beginning to finish.


Here is a finish sketch: 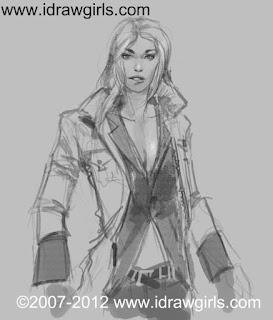 These are step by step tutorial drawing woman in trench coat.

Luca said…
agree... her face is very beautiful!Your women are awesome!:D
Brother thanks for your daily help!

Knuckles930 said…
First I couldn't post anythings but now I'm
at a different place. Anyway I hope you
all enjoy my last post with some new
photo's.

As for Xia check you hotmail. Earlier
today I've send you an email with some
stuff you might like to think about,
since I couldn't post. Just let me know
what you think.
December 8, 2008 at 9:23 AM

Knuckle> Thanks for all the help and such brother. I am so jealous you are out in the sun and sandy beach diving. Those are great set of images you pose! Very beautiful place! See you soon, enjoy your trip and daily activity. You can stay away from the internet for now. It's getting very cold here in Seattle. Brrrrrr...
December 12, 2008 at 9:19 AM

Anonymous said…
hey xia,
how are you..

first i want to say thank you for the vids you make, the are awesome :)
i love thema....:D

i have on question..
i try to make a texture brush like the one that you're using in this video to draw the eyebrows and the eyes.. but i can't find a brush with this kind of effect or texture... can you tell me where you get this brush.. or how i can make a brush with that awesome effect? i hope you can help me.. that would be great man..
thanks and have a nice day

idrawgirls said…
Anonymous> If you watch most of my free videos that I put out. You will discover that I use mostly default round hard and soft. But Look on the right column, there are tutorials on how to make PS brushes. Over two years of post almost everyday, I am sure you will find something valuable. :)