How to draw Captain America 2

September 29, 2009
How to draw Captain America 2, drawing video tutorial and step by step. Learn how to draw comics characters series #004.

Drawing and sketching Comics Super Hero Captain America. A video series of drawing comic book characters will hopefully help you gain knowledge of anatomy and dynamics in the positioning of the figure and the details. The more you watch and draw, the more you will get better. :)

A bit about Captain America, he was created by Joe Simon and Jack Kirby. Captain America was the alter ego of Steve Rogers, a sickly young man who was enhanced to the peak of human perfection by an experimental serum in order to aid the United States war effort. Captain America wears a costume that bears an American flag motif, and is armed with an indestructible shield that can be thrown as a weapon.

An intentionally patriotic creation who was often depicted fighting the Axis powers of World War II, Captain America was Timely Comics' most popular character during the wartime period. After the war ended, the character's popularity waned and he disappeared by the 1950s 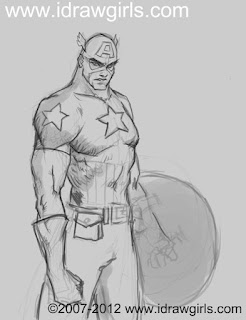 Here is another Captain America Sketch: 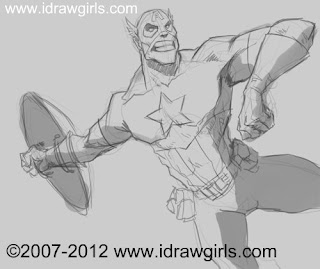 And another How to draw comics #007 Drawing Captain America:


FEATURE TUTORIALS: *Over 60 minutes to 2 hours of video.

Luca Cauchi said…
Thanks Xia, yeah it came much better with that change... thanks for helping us. Keep up the good work brother! :)

Luca Cauchi said…
the second one is another add right! well done, you really impress me how you get cool poses... any tips?