August 10, 2010
Painting reclining female figure. Female figure study recline step by step.
Here is the final painting, the whole painting took me about a good few hours. In this color sketch, what I want to try out is making brush strokes more visible and rougher than most of my usual digital painting, kind of like the previous Tutorial portrait painting digital which I did a couple weeks back. It turns out close to what I expected. Recently I feel like I want to explore more on brushes and its texture strokes since I've not been using it as much because I wanted to demonstrate in most of my video that default brushes round hard and soft edge can get the job done as good, as long as you understand the foundation of values in general. Many people ask me about custom brushes, what do I use...how can they download it and so on. I just want to point out here that fancy texture brushes will not do you any good if you cannot pull off a decent painting with regular brush in the first place. Yes, there are some trick and such, but you cannot rely on them forever to make you piece shine. What I want most artist to understand is that basic foundation is pretty everything. Go read Three important rules for painting, if one can only master these three (shapes, value, and edges), one can really make his/her own work shine. There are other elements involve, but these three are at the core of your painting or sketch or illustration. Anyway, here is a final nude female figure color study.
Also check out the following painting tutorials, they are new and update of the late 2010 tutorial on female figures.  Most of these are painting step by step tutorials, some include video tutorials.  First for figure study, you can go take a look at female model sheet or female figure study woman body proportion sheet.  Then there is a speedpainting figure study back which I pretty much focus on looseness control and brush strokes.  Also if you like comics style pin up painting, check out Emma Frost X-men first class and 2011 is year of the rabbit.  Both are not really focus on brush work, rather smooth rendering of the skin itself.  And Black Rock Shooter color sketch work is a really stylize that is similar to that of Anime or stylize Manga, but not typical. 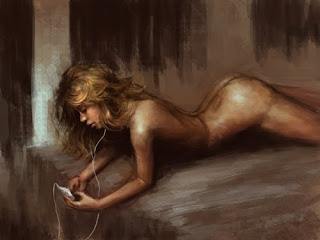 Here is a final image

Easy Manga Download said…
nice drawing! for those who want to download manga volume by volume, do visit us at http://easymangadownload.blogspot.com/. - for FREE!
July 24, 2010 at 10:42 AM

Anonymous said…
That is great. I like how it's painted like something from the old masters, but then she has an ipod making it more modern!
July 26, 2010 at 4:56 PM

C4llum said…
Great artwork! this has got to be one of my favourites of this year. btw, did you use any references of any kind or was it pure imagination?
thanks a lot! keep drawing ;)
August 2, 2010 at 9:12 AM

Anonymous> Thanks, that's what I was kind of after, I like leaving visible strokes on my piece...so it doesn't look so airbrushy or too digital...it appears more traditional oil paint in some way.

Sally> Thanks, glad you can learn a thing or two from them. Keep it up!

Mohit> Thanks, you too.

C4llum> Thanks,
It's a study so it means it has reference sources whether it be life session or photos. So...
I would say most artists that work professionally use ref and more than just one ref (helmet, metal, trees, figure, poses, and put them all in pieces to make it look real), but in some way...you use it as a starting point then add your imagination on to in. Like Picasso said, "Good artists copy, Great artists steal."
:)
Well, sometime you could also make it from pure imagination, but still you have to pull it off from a references from your brain's storage. Same different.
August 5, 2010 at 9:16 AM