December 29, 2010
Draw and paint woman and bunnies.  Happy holiday and new year! 2011 is around the corner and it is, according to Chinese calender, a year of the RABBIT.
According to the Chinese Zodiac, the Year of 2011 is the Year of the Rabbit, which begins on February 3 (Chinese new year), 2011 and ends on January 22, 2012. The Rabbit is the fourth sign of the Chinese Zodiac, which consists of 12 animals signs. The Rabbit is a lucky sign, or so they say.
Now that I think about it, I should have painted year of the tiger last year, or this year actually 2010. But oh well. Well the new year is around the corner, I just want to wish everyone to have a good and successful year. I have more than a few goal to accomplish in the coming year and I hope you have plan as well.
I'm planing to do more and better with idrawgirls.com, of course. I have no idea what it will be yet, but I am thinking about it everyday. Well, I'm also hoping to get a few digital comics for tablet out also.
Then personally, I am learning how to read faster or speed read. A few weeks ago I was really a slow reader, then I found some speed reading method on the web (check out speed reading) then I try it out. Now I can actually read more than +300 wpm and 70% comprehension.  They said some people can read +1,000 wpm with +90% comprehension.  I would love to finish reading that fast so I could learn many things from books in such lightening speed.  Thus increase productivity and more time to paint.  Hopefully it will get better. Then I will also learn how to write better. Writing is never really my thing, but it might come in handy some day. One more thing, I also plan to run +30 miles a week. Currently, I run almost everyday about 3-4 miles per day, some day 2 miles, so it comes about 20 miles a week. Next year, I am hoping to turn it up a few knots.
Oh year, one last thing, I would love to paint MORE, better and faster!  Hopefully the amount of work will exceed 2010 in quantity and quality.  Cheers!


For similar tutorials, videos and step by step instructions.  You can check out the new and update of the late 2010 tutorial on female figures.  First for figure study, you can go take a look at female model sheet or female figure study woman body proportion sheet.  Recline female figure study has two posts.  The first is nude recline female figure quick color.  And the second is female figure study recline step by step.  These two part tutorial I pretty much focus on rough brush work and play around with textures.  Both are the same painting but it has part one and part two.  Then there is a speedpainting figure study back which I pretty much focus on looseness control and brush strokes.  Also if you like comics style pin up painting, check out Emma Frost X-men first class.  This one focus on smooth rendering of the skin itself.  And Black Rock Shooter color sketch work is a really stylize that is similar to that of Anime or stylize Manga, but not typical.


Anyway, hope you all have a happy new year.


Here is a painting "It's raining rabbits." 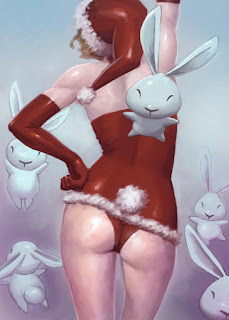 Here are step by step digital painting "It's raining rabbits"

Here is a full size image: Year of the rabbit 2011

chalian said…
Hi Xia !
Good resolutions for 2011!
Good luck!
:;
The discovery of your blog was a nice surprise for me in 2010 and i hope to make again progress by watching your tutoriels !

Dan Ferreira said…
Happy holiday and new year for you too Xia! Tks for the support along side this year... i really hope we can all can overcome our expectatives for 2011.
all the best,
cheers!
December 29, 2010 at 2:33 PM

Luca said…
That's great to see and to know you're working hard in learning and taking your skill to that next level! I too have some working resolutions :)

Brother we live on opposite planes of the earth but hey, such a coincidence-- I also started to work on reading faster. There's a technique that works WAY better than speedreading. Its all about the subconscious part of the mind.

Chris Reeve said…
Yea I'm planning on getting more exercise in, and now that I have a job again I can relax in the evenings (if that makes sense?) so I plan on getting at least one picture up here to show you guys. It's only been what, 3 to 4 years since I joined or something ;)

idrawgirls said…
@Everyone Thank you guys! Hopefully this year I can post more and variety of useful subjects.
Many of you have come a long way and you know who you are. I am glad this site has helped so many. I didn't really expected the overwhelming welcome and cheering back when I start the site.
Thanks for the support all along especially Luca and Chris, you two have been giving us support, feedback and many things that still keep us alive.
Thank you guys!
May this be your best year yet. ;-)
January 14, 2011 at 9:37 AM