Learn how to Draw and Sketch comics facial structure of male hero character Ryu from Street Fighter. Learn from Step by step and video tutorial. Drawing and sketching step by step: male portrait character design for manga, video game, and comics basic. The process shows BASIC drawing and sketching stylize face of the character from Street Fighter that will help you gain knowledge of anatomy and dynamics in the positioning of the figure and the details.
Ryu (リュウ Ryū) is the main character and "hero" of the Street Fighter series. Ryu has made an appearance in every Street Fighter game, as well as in every crossover fighting game with Capcom characters in it. Ryu has arguably become the most famous character in the fighting game genre, starring in early fighting games such as Street Fighter, but really got well known in Street Fighter II, where he was considered a "basic" character.
Ryu is portrayed as a Japanese man whose basic, and most recognizable attire from the Street Fighter II timeline consists of medium-length brown hair, brown eyes, a long, red headband; a white karate gi with the sleeves ripped off at the shoulders, bare feet, and a black belt. Ryu's first appearance in the original Street Fighter replaced the red headband with a white one and depicted him with bright red hair, gray eyes, and red slippers. In the Street Fighter Alpha series, Ryu’s hair became a lighter shade of brown, and he retained the white headband which hearkens back to his appearance in the first Street Fighter. Learn to draw comic book characters with tips from a professional concept artist and illustrator Xia Taptara.

Here is a final sketch of Ryu Face drawing 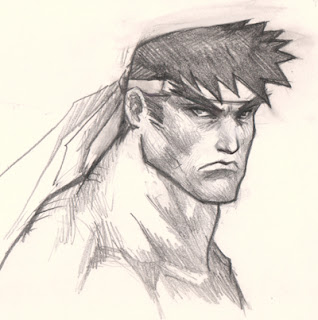 Click here for a bigger version of the image: How to draw Ryu face