September 01, 2011
Character design different ethnicity male heroes tutorial.  This post is my attempt to sketch and paint a character concept of male hero archetype with different ethnicities or nationality.  So far I art about four hero characters and I mainly paint focusing on just facial features.  If you paint a lot of portrait with variety of ethnicity, then you will probably know that the facial feature are not that much different.  Once you know where to to make changes, you can easily paint over your white guy to be Asian or black or anything.  It does not take much to change one facial feature to another.
In this concept art, my intention is to create the same type of super hero with variety of races.
A lot of viewers often ask me how come I don't paint a lot of black guy, Latino, etc.  I actually do if you look at all the post in the blog, there are plenty of them.  But most of the time job requirement make me lean toward the majority.  Also most of the models I paint in life session are Caucasians, males and females.  Anyway, this was really fun for me.
Below are the illustration of our hero dudes 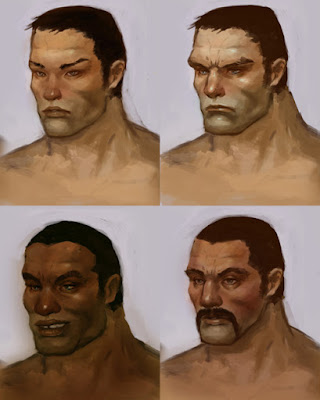 
Below are bigger for one of each. How to draw hand video tutorial learn step by step basic. Now back to the basic a little bit. I have so many emails, youtube comment, facebook, etc. asking me if I could do a drawing hand tutorial. Well, it's been a long and lots of requests. So here we go, this video is for you guys. Other than faces (facial expression), hands are probably the second most expressive and intricate part of the human form. So hands in general should receive careful attention. Aside from the head, they are usually the only other exposed part of the body and can be useful in communicating without verbal. Hands are equally as expressive in gesture, emotion and action. Because of the complexity of joints, masses and planes, along with their expressive nature, the hands can, and usually are, the hardest thing to learn on the entire human form. But in this tutorial, in my opinion, you don't have to draw every single detail of the hand because as a concept artist or illustrator, you