RoboTech the movie: Scarlett Johansson is in as Lisa Hayes?

Anyway, More Robotech info:
according to the Hollywood Reporter, Tobey Maguire is going to produce, and possibly star in, a live-action movie based on the Robotechaka Macross TV series Anyone who got into the show in the mid-Eighties will tell you that Robotech had a level of depth and realism well beyond that of any other animated series on US television at the time, which isn't at all surprising considering its Japanese origins (Robotech is credited with helping introduce anime to American audiences). Anyway, hopefully Tobey won't dumb things down like Michael Bay did with the Transformers movie. It was tough enough discovering a few years later that the entire show was actually three entirely different Japanese anime series awkwardly grafted together so that they'd have enough episodes for syndication in the US market -- turning Robotech into yet another mindless action fest might just be too much to take.
*I really have no idea if Johansson will be cast into this but she will appear with Natalie Portman in the up coming film "The Other Boleyn Girl."

Here is my Robotech doodle just for the hell of it because I was a Huge Macross kid. :)
Com'on a fighter Jet turning into a Giant Robot with a real person in it?

Here is a finish Illo-sketch of RoboTech Lisa Hayes: 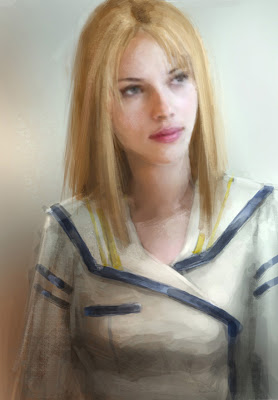 new from Wacom!) Economy for everyone.

** If you have any basic questions or specific and do not get my reply right away, please be patience. I usually answer them. In the mean time you can browse through all the Menu or Archives. Your questions may already be solves in one of these tutorials.

Have a GREAT WEEKEND & thanks for stopping by!
Tutorial: "Robotech"

Temperamental said…
omg you're AWESOME!!!! I LOVE your drawings. omg. you're a total inspiration to me. i hope i'll be able to draw as good as you someday.

idrawgirls said…
Temperamental> Thank you, I tried. You wanna know a secret? Watching my videos every update, then you will...that's what they said.
Peace! ha ah
January 28, 2009 at 4:00 PM

Z said…
Hi, great painting. Are you painting from a picture or are you doing it by memory? I'm always amazed how a profile painting goes from having a head with eyes, nose, and mouth and through further rendering and refinement becomes the actually person you are trying to depict. At 2:25 in the video, the painting does not have the likeness of Scarlet, but moments later after some refinement it does. What do you look for and change to to take the painting to that next level? I can draw people and it looks decent, but never has their likeness. Thanks!
March 28, 2009 at 11:02 PM

idrawgirls said…
Z> I mixed and match element from reference. To answer your question...practice and really practice from real model also. Find life drawing session on college campus go there once or twice a week. Draw from life, memory and ref and keep looking for things that inspire you. :)
March 31, 2009 at 3:09 PM

I love this piece as well as your Tobey Maguire as Rick Hunter. Can I interest you in another similar project? I emailed this to you today to your Hotmail account subject: Robotech Project. If so, please contact me!
February 10, 2010 at 10:06 PM