As we know, we will get to see the Robotech (Macross) comes to life.
The actor Tobey Maguire (Spiderman) will head the "Robotech" live action movie.

ROBOTECH: 2010
The actor Tobey Maguire will head the "Robotech" live action movie.
Maguire, across his company Maguire Entertainment, it will be initially producer of the tape, which rights were bought by Warner Bros.
Maguire not only would occupy producer's cargo in the movie. since also his idea would be to be the protagonist of the movie version of this classic, The script for the big screen will be written by Craig Zahler.

"We are very excited to bring 'Robotech' to the big screen," Maguire said. "There is a rich mythology that will be a great foundation for a sophisticated, smart and entertaining film."

After slipping on a mask for Spider-Man, Tobey Maguire might be slipping into a giant robot for "Robotech." After a lengthy negotiation, Warner Bros. Pictures has picked up the rights to bring anime classic "Robotech," which featured giant robots known as mechas, to the big screen. Maguire is producing through his Maguire Entertainment banner and is eyeing the lead role in what the studio plans on being a tentpole sci-fi franchise. "We are very excited to bring 'Robotech' to the big screen," Maguire said. "There is a rich mythology that will be a great foundation for a sophisticated, smart and entertaining film." Drew Crevello also is producing through his Supercool Hollywood BigTime Prods. Craig Zahler ("The Brigands of Rattleborge") has been tapped to write the screenplay. "Robotech" was a cartoon series during the 1980s from Harmony Gold USA and Tatsunoko Prods. It was re-edited and re-dialogued to combine three Japanese anime series to give the producers enough episodes to air as a daily syndicated series.
from the technology on an alien spacecraft that crashed on a South Pacific isle. Mankind is forced to use the technology to fend off three successive waves of alien invasions. The first invasion concerns a battle with a race of giant warriors who seek to retrieve their flagship's energy source known as "protoculture," and the planet's survival ends up in the hands of two young pilots.

I am not sure if Togey will be playing Rick Hunter, but I want to have fun doodling it. I am a big fan of Macross.

Here is a finished color concept:(click to enlarge) 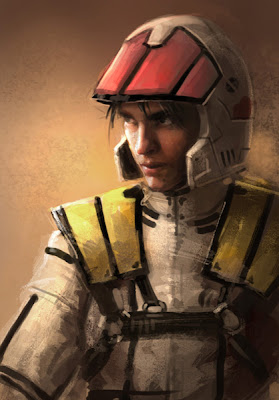 Here is a video process:

new from Wacom!) Economy for everyone.

** If you have any basic questions or specific and do not get my reply right away, please be patience. I usually answer them. In the mean time you can browse through all the Menu or Archives. Your questions may already be solves in one of these tutorials.

Have a great day & thanks for stopping by!
Tutorial: "Robotech"

Anonymous said…
Awesome concept, but too bad they can't get a different actor to play Rick Hunter, keep up the good work, I will keep watching to see what new you do. ;)
June 4, 2008 at 11:46 AM

Anonymous said…
Wow I didn't know they were making an Akira movie, that will be awesome, but Di Caprio??? Why him of all people, he doens't really fit the rough look of a teen... Can't wait for these to come out though!
June 11, 2008 at 4:00 PM