How to paint Conan the Barbarian

August 18, 2011
How to paint Conan the barbarian.  Conan the Barbarian digital painting video tutorial.  Here is a new version of Conan the barbarian that will be in theater in late 2011.  It is a speed painting study video of one of the screenshot from a movie.  If you have seen my speed painting or digital painting videos regularly, you will notice that I usually start of with lines, then paint a monochromatic value and so on.
In this painting video, I took a different approach in my own study.  I just try to get the shape right away without using or depending on any line work.  If you have a model, landscape setting or references, first thing you should do when paint is to paint the biggest shape you see.  Also try to get the shape as accurate as you can, then second biggest and so on.  That is what I did in this painting, I capture the biggest shape and simplify everything in the image or make them simple shape to begin with.  Then once you get most of the main elements all together, you can start assigning value and refine the shape.  Also watch for edges whether it is hard edge, soft edge or lost edge.  Speedpainting is a good practice for quick exercise either value study or color study.  The task force you to simplify things that you painted, no matter how complex it will be.  It trains your eyes and your brain to work together and think quick.  One of the most important trick is squint, and squint really good.  If you don't know how, don't worry.  It took me a few month to actually understand the concept of squinting in painting, and eventually, with time, I kind of get it.


Conan the Barbarian (also known as Conan the Cimmerian, from the name of the character's homeland, Cimmeria) is a fictional character. He is a hero, a well known and iconic figure in American fantasy, and the most famous barbarian in fiction.
Conan is often associated with the fantasy subgenre of sword and sorcery and heroic fantasy. He was created by writer Robert E. Howard in 1932
Conan is a Cimmerian (based on the ancient Indo-European nomads of the same name and, somewhat loosely, on the Celts), a barbarian of the far north. One of his grandfathers, however, came from a southern tribe. He was born on a battlefield and is the son of a village blacksmith. Conan matured quickly as a youth and, by age fifteen, he was already a respected warrior who had participated in the destruction of the Aquilonian outpost of Venarium. After its destruction, he was struck by wanderlust and began the adventures chronicled by Howard, encountering skulking monsters, evil wizards, tavern wenches, and beautiful princesses. Conan the Barbarian (previously titled Conan 3D)[3] is a 3-D sword and sorcery film based on the character Conan the Barbarian created by Robert E. Howard. The film is a new interpretation of the Conan mythology. It stars Jason Momoa in the titular role, alongside Rachel Nichols, Rose McGowan, Stephen Lang, Ron Perlman, and Bob Sapp awith Marcus Nispel directing.

Here is the final image of Conan the barbarian speed painting 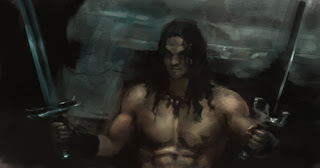 Below are step by step how to painting images

Here is the final speed painting of Conan the barbarian.

Here is to download a bigger image, Conan the barbarian.

Also if you just want to take a look at some male basic anatomy video and step by step tutorials to supplement the barbarian tutorial above, Both Drawing body muscle torso anatomy video and Drawing arm muscles bicep tricep video are very useful as drawing and rendering muscles and human anatomy demonstration for artist.

More basic lessons on how to constructed (draw) a face. Then these tutorial will guild you to a basic how to: How to draw lesson girl face, How to draw person head basic. And digital painting tutorial rogue samurai female. As for the face or head (women, female) Draw girl's face how to lesson video and step by step and learn how to draw face, woman. Enjoy the video tutorials.  Also look for more speed painting or digital painting tutorials from the thumbnail images on top of the blog.
Character Sketch Tutorials: Male VIII