How to draw Susan Storm Fantastic 4

It's been a while since I did a sketch tutorial video on woman drawing. Since I've been doing many comics superheroes sketches so I thought I should do the girl's version of video also. My first pick is Susan Storm from Fantastic 4 comics. It was the first American superheroes team comics I read when I was a kid (well, other than Batman, Superman and the Hulk). Anyway enjoy the tutorial.

A bit about character. Susan Storm is the first female superhero created by Marvel in the Silver Age of Comics. She's also known as Invisible Girl and later, Invisible Woman. Susan is a fictional character, a Marvel Comics superheroine created by writer Stan Lee and artist/co-writer Jack Kirby. The character first appeared in Fantastic Four #1 in November 1961, and like the other founding members of the Fantastic Four, Sue received her powers after being exposed to a cosmic storm. Her primary power deals with light waves, allowing her to render herself and others invisible. However, she can also project powerful fields of invisible psionic energy which she uses for a variety of offensive and defensive effects.

*She's also an object of infatuation for Doctor Doom, and, most notably, Namor the Sub-Mariner.

If you are a beginner and just stumble upon this blog, go watch these basic video tutorials: How to draw lesson girl face, How to draw person head basic and Draw and render human head with different light sources. (These two are a little more basic)
As for basic figure or body tutorial, you should go watch the following, How to draw female body torso step by step (Easy lesson on how to sketch and draw a body in the very easy basic way that works.), and how to draw woman figure hip pelvis (Similar the the previous, this is a basic way to draw pelvis, butts, and legs that will lead to advance form). There are also figure in simple form using lines or what we called gestures figures video tutorial and learn how to draw woman character sheet. 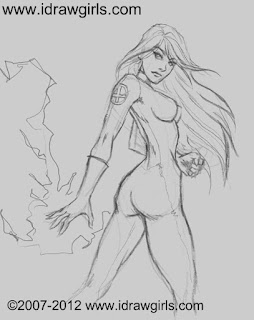 
Here is another Gulidwars' character concept. more to come. Enjoy :)

Anonymous said…
I really like the way you draw the comic book super heroes!

Chris Reeve said…
Is it just me, or has Dragon Age gone for a similar logo to your GW2 one?

Luca said…
Wow, I dig this one. "Beauty is in the eye of the beholder"... yeah I agree, but why do I like all of your girls? Maybe we have the same taste and aesthetics for women, but the ones I draw aren't as nice and beautiful as yours -- more practice :)

I suggest you to take this to a further color stage and refine it cause it's really good.

P.s. Is there any change you send me this kind of brush used? (or tell me how to get the effect).. thank you and your GW2 concept is also hot. will be waiting for more of them brother.

Karla Diaz said…
Very useful! thanks
Sometimes I use geometric forms too.
November 3, 2009 at 5:44 AM

Chris> Ha ha...I'm not in the liberty to input my opinion in public on this one. :)

Luca> thanks bro, possibly maybe...so many things in my mind right now...they are just sketchy sketch for now. Like that samurai lady one and the chic with pistols...maybe some day along the road. :)

Knuckles930 said…
Well its nice to see a new look for the site's.

I've finally gotten back home after half a year of Lombok. Still trying to find my way around here.

Anyhow, I'll reattach the mailing invitation form to the community so I can start handling those again.

Besides that I'll get together a collection of nice photos from Lombok and see if I can find what little drawings I made during my time there.

Knuckles930 said…
Thanks, its great to see how everyone is getting better at what they do.

I reconnected the contact page and should be able to pull together a post with photos from Lombok within a few days.
November 4, 2009 at 1:51 PM

Ralph Contreras said…
Awesome tutorial! This will help me from drawing my characters too stiff. Tanks for the site and for sharing! - Shazam!
March 17, 2010 at 4:02 PM

What brushes you use? And where I can find them?

idrawgirls said…
Lucas R.R.> Here is how to make one then you can learn to customize your own. http://idrawgirls.blogspot.com/2007/11/learn-to-make-photoshop-custom-brush.html
April 29, 2010 at 5:10 PM

Mike White said…
Thanks for your wonderful tutorials, I have been trying to draw since childhood, and it was your tutorials that finally pushed me over the top. Thank you. Here is my recent work, that I was able to complete due to your kind help.
http://mike-white-n00bie.deviantart.com/#/d2y69f4
September 6, 2010 at 5:16 PM

idrawgirls said…
Mike> Cool brother! I'm glad the materials on the blog are helpful to you. Keep up the good work!!! and practice, practice, and practice!!! peace!
September 6, 2010 at 10:27 PM

Noel Petroni said…
Hi, I really love your work! You've inspired me to pick up my pencil and start practicing again!!

Question: I'm interested in purchasing a tutorial ""Drawing Essential: Female Figures" and I wanted to ask if it's 'Photoshop' orientated or it's good for to learn on paper sketching? Also.... since I'm not proficient in computers, are the downloaded videos compatible with imac?

idrawgirls said…
@Noel thanks man! Everyone should art or play music and rugby...it will make the world a better place. :-)
The "Drawing Essential" series are traditional pencil and paper tutorials. Yes, you can view it on Mac using Apple Flip4Mac on Quicktime.
There are also a bunch of FREE Videos on the feel free to spend all day watching them.
:-)
Peace!
November 28, 2010 at 4:25 PM

FugitiveDiesel said…
I still have a really tough time getting down the proportional sketch. Did you take classes specifically for that? My eyes on my women always make them look Asian as well which would be fine if Susan storm was asian
June 22, 2011 at 9:35 PM