January 07, 2011
How to draw Black Rock Shooter.  One of my goal this year is trying to get one good quick sketch daily.  Well, I have been trying to do that in the past couple months, but unfortunately it didn't go as plan.  There are always things come up, distraction, etc.  Quite often it makes me feel unproductive.  Hopefully this year, I would be able to do at least five decent sketches per week.  Yes, there are times that some sketches did not meet my quality control and no, you won't get to see them.  ;-)
So here is a quick color sketch step by step of a character called Black Rock Shooter.  I saw this character somewhere on the internet and thought she is pretty cool.  So I decide to do a fan version of Black Rock Shooter.  I did not really know what it was then I did some research, and below are some essential information about Black Rock Shooter.


Black Rock Shooter (ブラック★ロックシューター Burakku Rokku Shūtā?) is a 2010 Japanese original video animation produced by Yutaka Yamamoto's studio Ordet and directed by Shinobu Yoshioka. The 50-minute OVA is based on the song of the same name by Supercell and its accompanying music video with illustrations by Huke. Musical composer Ryo and Huke, both members of Supercell, collaborated on the project.


Story of Black Rock Shooter
Mato and Yomi are friends, then Yomi disappeared one day. As Mato tries to find Yomi, she merges with Black Rock Shooter and duels Yomi, who was possessed by an evil being called Dead Master (デッドマスター Deddo Masutā?), who wields a large scythe. As the possessed Yomi is about to fall to her death, Black Rock Shooter saves Yomi from falling, and embraces her, causing Yomi's body to be free from Dead Master. The events of their lengthy battle are dispersed throughout the anime. Yomi and Mato return to their normal lives, but Yomi begins to act strangely.


It's not so much of the story I am interested in, I just thought the character design looks cool and promising. I really like it.


If you are looking for more of simple and typical Anime style drawing tutorials, you can go to How to draw Anime girl face front view, How to draw Anime girl face side view, How to draw Manga girl body, Drawing Anime girl face 3/4 view, How to draw Anime girl sitting pose.  These are all basic pencil drawing on paper tutorial, nothing complicated.  All of them should be easy to follow instruction with step by step images.
You can also check out the new and update of the late 2010 tutorial on female figures, most of these are painting step by step tutorials, some include video tutorials.  First for figure study, you can go take a look at female model sheet or female figure study woman body proportion sheet.  Recline female figure study has two posts.  The first is nude recline female figure quick color.  And the second is female figure study recline step by step.  These two part tutorial I pretty much focus on rough brush work and play around with textures.  Both are the same painting but it has part one and part two.  Then there is a speedpainting figure study back which I pretty much focus on looseness control and brush strokes.  Also if you like comics style pin up painting, check out Emma Frost X-men first class and 2011 is year of the rabbit.  Both are not really focus on brush work, rather smooth rendering of the skin itself.

Here is the Black Rock Shooter character so far 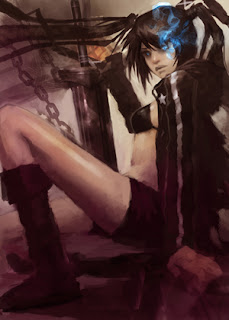 Anyway, below are the process of how I sketch this out. It took me longer than I actually anticipate, a few hours.  I really hope I can pull off one decent sketch per day or couple days.


Here is a step by step sketching and painting Black Rock Shooter.

Here is the final sketch of Black Rock Shooter.  It is still in work in progress.  I will get back to it one of these day.  But for now...I am going to do a new quick sketch of something else.

To be continued
When I feel like getting back to it.  ;-)

I'm really pleased each time i look at your tutorials. They are very well explained either on technical or artistic side, and are a real pleasure to see.
So a big thank you to you and idrawgirls.com for your devotion and best wishes too.

idrawgirls said…
@David thank you for your kind regards as well. I am glad that people are happy to visit the site and get something improve their skill and most importantly bring them joy and happiness as well as I.

Anonymous said…
Hello Xia, I'm checking your great tutorials regulary. They are fun & ultimately inspiring. For this one it feels that her leg is out of proportion.
January 14, 2011 at 10:34 PM

cheating or not, could you explain more in detail, may be if you have another example, how exactly is the smoke effect created? It does look real...
February 14, 2011 at 7:13 PM

idrawgirls said…
@Daniel There is no secret. It is fire brushes http://idrawgirls.blogspot.com/2009/02/fire-brush-sets-photoshop-brushes.html
February 18, 2011 at 9:38 AM