Here is another character villain character. This guys is extremely genius like a mad scientist for the Japanese Empire WWII military special ops called "Midnight Blood". It's secret operation station on the quiet town right next to HangZhou before the war actually start. He came in the rank of "Shōshō" or "Major-General."
Yeah I know the comics is getting complicated and possibly interesting than you think right?

Here is a final sketch of un-named yet (Major) 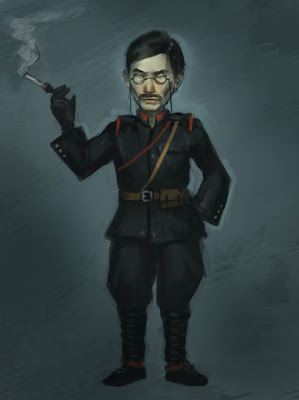 It's a really quick and rough character sketch...nothing fancy.

Let's ...ok step by step how I draw his facial structure.

If you are a beginner, look for more video tutorial on male body, anotomy and such go watch Drawing body muscle torso anatomy tutorial. And Drawing arm muscles bicep tricep There will also be some basic include there. Then you could try out the following tutorial.

In this tutorial, the study I was doing is leaning toward Asian male type. If you are looking for more variety of different type of Facial structure tutorial go to Character Design Face Male Merchant Character, or Drawing Male Face Swordman and Learn how to draw and paint face. They might be what you are looking for.
If you are a beginners drawer. Then for more basic type of just drawing without detail render: How to draw person head basic and Draw and render human head with different light sources. (These two are a little more basic)
Also watch my last tutorial: Drawing Tutorial Zombie Ninja have fun.

Then I design the character... after I study the face.

idrawgirls said…
dahaca> Yes, he's short, but serious one. No one can take hime lightly, I like to mix a comical with seriousness. As far as, manage? I donno. More Villains make the heroes have more obstacles which make the story more confusing, no no...I mean interesting. :)

Chris> ha ha, you know it. He probably has god complex, but really sharp! :)